Book Direct with the Owner at Darwin History And Wartime Experience Tour with Accommodation ACT in Darwin, for all your Attraction and travel needs.

Looking to see Darwin differently? Explore Darwin and its rich wartime history with a guided tour from the back of a WW2 truck!Â  On this 90-minute experience, you'll pass many of the city's most important historical sites, including Government House, the East Point gun battery and military precinct, the 1934 QANTAS hangar, Stokes Hill oil storage tanks and tunnels, Fort Hill Wharf, and Darwin Harbor. Your guide will tell you about the history of Darwin from the early explorers to the WW2 bombing of the city by the Japanese, and will recount the Cyclone Tracy in 1974 and more. An optional stop can be made at the East Point Military Museum (entry fee not included). Choose from four departure times when you book. Tour vehicle can carry a maximum of 18 people per tour.

Begin your experience from the Darwin Visitor (Tourist) Information Center at your selected time. Expert commentary and 1940s-area music will accompany your tour. You'll commence your tour with a short trip around the Darwin city center where you'll learn about the buildings, statues and points of interest associated with Darwin's establishment and early development. Pass government and parliament houses, then follow the esplanade alongside Darwin's beautiful harbor where the narrative turns to Darwin's involvement in WW2. You'll pass sites associated with anti-aircraft batteries, Catalina flying boats, army and navy barracks, and the sombre sites of loss of many Australian and American servicemen and civilians.Â

From there, your first stop will be at a house where bullet holes of an attacking Japanese zero fighter are still in evidence. Then head north out of the city and be treated to stunning views of Mindil beach, Fannie Bay, and the harbor entrance before stopping at the 1934 QANTAS hangar.Â  Learn about Darwin's involvement in the early air races and the devastation wrought by Japanese air forces over Darwin during the war.

Then travel to East Point military precinct. As you pass through the tropical monsoon rain forest in the area, you might spot some of the abundant wildlife: wallabies, eagles, kites, snakes, magpie geese, and dingoes. At East Point you have the opportunity to disembark at the Military Museum/Defense of Darwin Experience (entry fee own expense). If you choose to stop here, you can be picked up by the next tour an hour and a half later. Find numerous interactive displays at the museum and experience what it was like to be in Darwin during the first bombing raid!

Next, head back along the north east portion of the city while listening to speeches from prime ministers and presidents. Pass by oil storage tanks and tunnels, machine gun strafing marks, Stokes Hill and Fort Hill Wharves, and Darwin Harbor. Stop to learn about the devastation of shipping during the first Japanese raid.

As you are brought back to the Tourist Information Center, learn about post-war Darwin, the subsequent devastation by Cyclone Tracy in 1974, and Darwin in the modern era.

Tours conclude approximately 80 - 90 minutes after departure, if museum stop is not made. If you choose to stop at the museum, tour will last approximately 3 hours. Please advise at time of booking if you intend to hop off at the museum so arrangements can be made to pick you up on the subsequent bus. 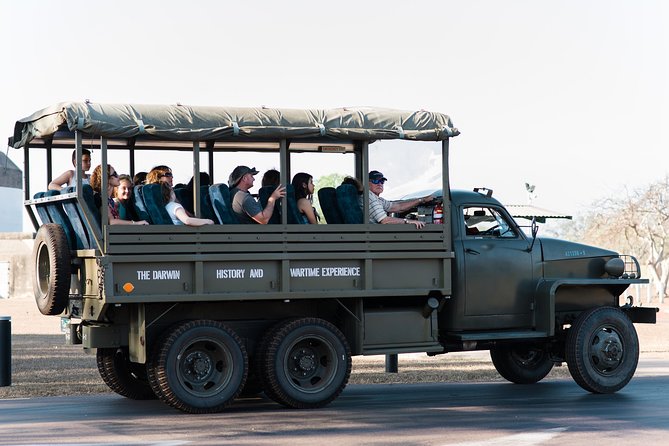 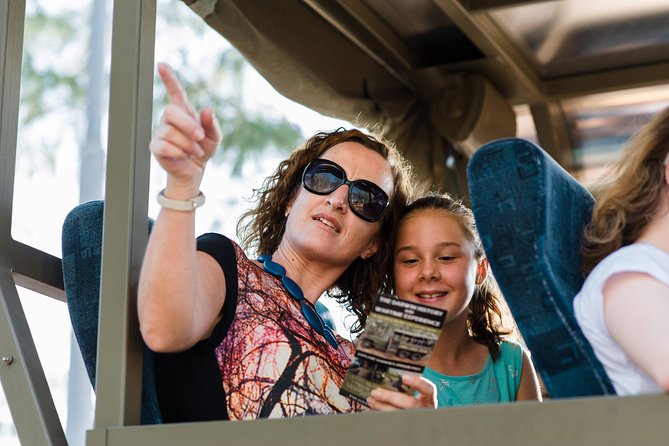 Accommodation ACT welcomes Darwin History And Wartime Experience Tour in Darwin NT, we offer an experience that takes you on a journey of a life time in Darwin. For all your attraction and things to do, book your adventure today.

Is Darwin History And Wartime Experience Tour in Darwin your property on Accommodation ACT, please claim your listing and subscribe to update your contact details and receive your phone calls and emails from your clients.